Some of these photographs are from the archived collection in the Heritage Centre. The majority of these were collected by the late Jim Hamilton and include his own photographs taken in the 1980s and 1990s.

Stockbriggs House and Estate is to the south-west of Lesmahagow between Lesmahagow and Coalburn next to the river Nethan, just upriver from another former country estate, Auchlochan.

Lithograph of Stockbriggs, the residence of J.W.Alston, Esq. (from the Annals of the Parish of Lesmahagow)

About the middle of the seventeenth century, it was recorded that Thomas Whyte was in possession of the 20s (shilling) land of Stockbriggs. His eldest son James married Marion Cochran, eldest daughter of John Cochran of Struther in 1715, and in the same year his daughter Grizel married John Brown of Auchlochan.

In 1785, the estate of Stockbriggs was sold to James Corbett of Kenmuir, Glasgow with the exception of the farm of Skellyhill, which was still in possession of the Whyte family. After litigation. Skellyhill and Waterhead became the possession of the above John Brown Esq.of Auchlochan.

On 21st March 1803 James Corbett, Master of Lesmahagow Masonic Lodge marched in 6th place in the procession, at the laying of the foundation stone of the Parish Church which was reported to have seating for 1,600, and built at the cost of £2,220-10/-.

In 1828 the heirs of Corbett of Stockbriggs sold the estate to John Gibson Esq., Procurator-Fiscal at Lanark. In 1836 John Gibson sold the estate to James. W. Alston Esq., merchant in Glasgow. Mr Alston erected a substantial mansion-house (seen above) and beautified and improved the estate. The river Nethan intersects the property, and meets the Logan water in a picturesque valley near the house .

On the 25th October 1837, James Alston was elected as a Director to the board of the newly formed Lesmahagow Provident and Savings Bank. After several name changes it became the Royal Bank. His wife was also involved in the community with Lesmahagow Clothing Society which was set up for the purpose of suppling articles of clothing to the industrious and poor of the district. Clothing to the value of between £10 and £15 was annually distributed by Mrs Alston, Mrs McKirdy of Birkwood and Mrs Greenshields of Kerse, as well as other ladies.

On the death of James Alston, the estate was inherited by James' eldest son William, who then sold it in 1879.

Genealogical chart of the Alstons of Stockbriggs

The sun house at Stockbriggs

Around this time, revenue was raised thanks to Auchenbegg Colliery being within the estate, it was the earliest deep pit in the district and produced gas coal which was much sought after. When opencast workings commenced there in the 1980s a coal cutting machine was uncovered. It is now in the Scottish Mining Museum at Newtongrange. There were miners' rows near to the colliery. Unfortunately, there are no photos of them, though they are named on a map of the area. Close by, there were other houses at Shodrig or Shoulderigg as it was changed to later, hence Shoulderigg Road. It ran from Coalburn to the crossroads at Porterhall.

At the time of the census in 1901, William Herbert, a gamekeeper was living at Stockbriggs Lodge with his sister Alice who was a Housekeeper. Also named was Andrew Kirkland, a visitor. He was a joiner, aged 24. At Stockbriggs Coach House resided James Rodger aged 16; he was listed as a servant and a ploughman. There were no details of who lived in Stockbriggs House.

By 1882, the estate was owned by James Waddell according to a Trader's Directory of that year. The 1891 valuation Roll gives John Waddell as the Proprietor, the assumption being that he was James' son. The latest reference found for John Waddell was 1915. By 1928 it appears to have been owned by a John McMillan. References quoted from 1882 to 1928 are taken from Traders Directories for that period.

During the Second World War the main part of the premises was used by the Canadian military. By that time, the estate belonged to the McMillan/ Buchanan family until the 1970s. The house was not in a good state after the military left it.

John Buchanan was living in Turlood Cottage on the estate in 1977.

The Stockbriggs House building fell into disuse and over the years it became dangerous. In 1997, it was partially demolished.

Edward Richard Alston, a zoologist, was born at Stockbriggs, near Lesmahagow, on 1 December 1845, the fifth son of Mr J. W. Alston of Stockbriggs, a wealthy merchant of Glasgow. A delicate child, probably suffering from early tuberculosis, he was educated at home. From his earliest years he was keenly interested in natural history, and over time he had various wild animals as pets, which he studied at great length. This interest increased to such a degree that years later he had many articles published in the "The Zoologist" Magazine, under the pen-name of "Tomtit". His subject material ranged from the Wild Cattle of Cadzow to Roe-deer and hedgehogs. He became an authority on birds and mammals and some of his papers on rodents and American squirrels were published in Proceedings of the Zoological Society in the 1870s. Alston was elected Zoological Secretary of the Linnean Society in 1880. He died on 7 March 1881.

Stockbriggs in the 21st century

Although demolition took place at the end of the 20th century, it was not complete and the entrance, part of the east tower and some of the walls can be found partially hidden by the undergrowth at Stockbriggs.

We are grateful to John Weir of Lesmahagow for the information about these remains and for the photos. For more of John's photos see link below.

More photos of the ruins of Stockbriggs House

Parts of the stonework, including a Fleur de Lys, were transferred to the walled garden at Auchlochan Retirement village. Some of the stones were used in the construction of the tiered gardens there.

The fleur-de-lys of Stockbriggs House used as a feature in the walled garden at Auchlochan. This embellishment can be seen on the top of the right-hand column in the photograph of the old house at the top of this page .

More photos of reuse of the stonework at Auchlochan.

The row of cottages and Stockbriggs Steading built near where the house was. Date of photo: 23rd April 2021

This row of cottages at Stockbriggs was built in the early 2000's. The architect, Raymond Angus of Angus Design Associates of Hamilton, seems to have drawn inspiration from the design of the old house. Date of photo: 23rd April 2021 Stockbriggs Steading was formerly stables around a courtyard. It was converted into a dwelling house from Feb 2011 to Aug 2011 and was also designed by Raymond Angus of Angus Design Associates in Hamilton. 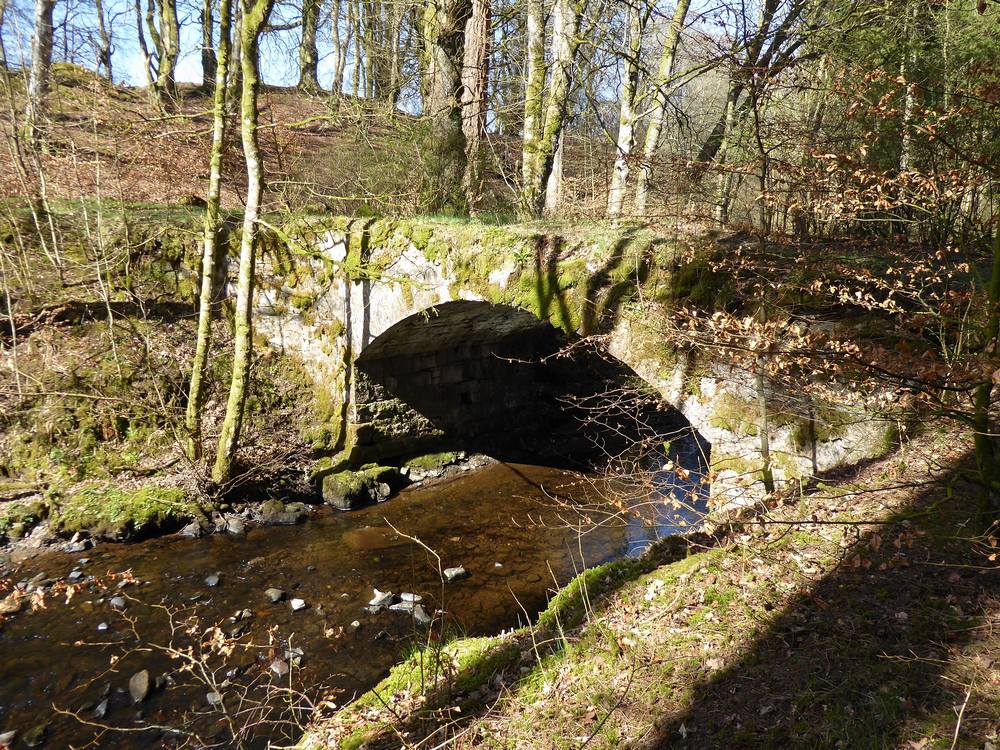 The bridge over the Nethan from Stockbriggs towards Yonderton Farm. Date of photo: 23rd April 2021 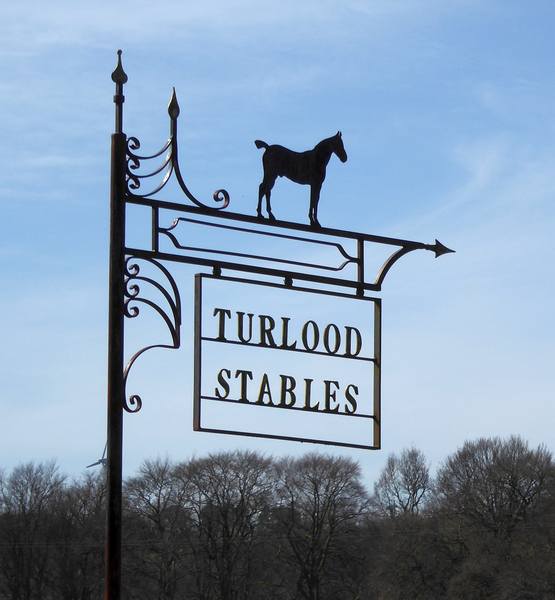 Turlood Equestrian Centre is on the Stockbriggs Estate. This is the sign in Cumberhead Road. Date of photo: 23rd April 2021 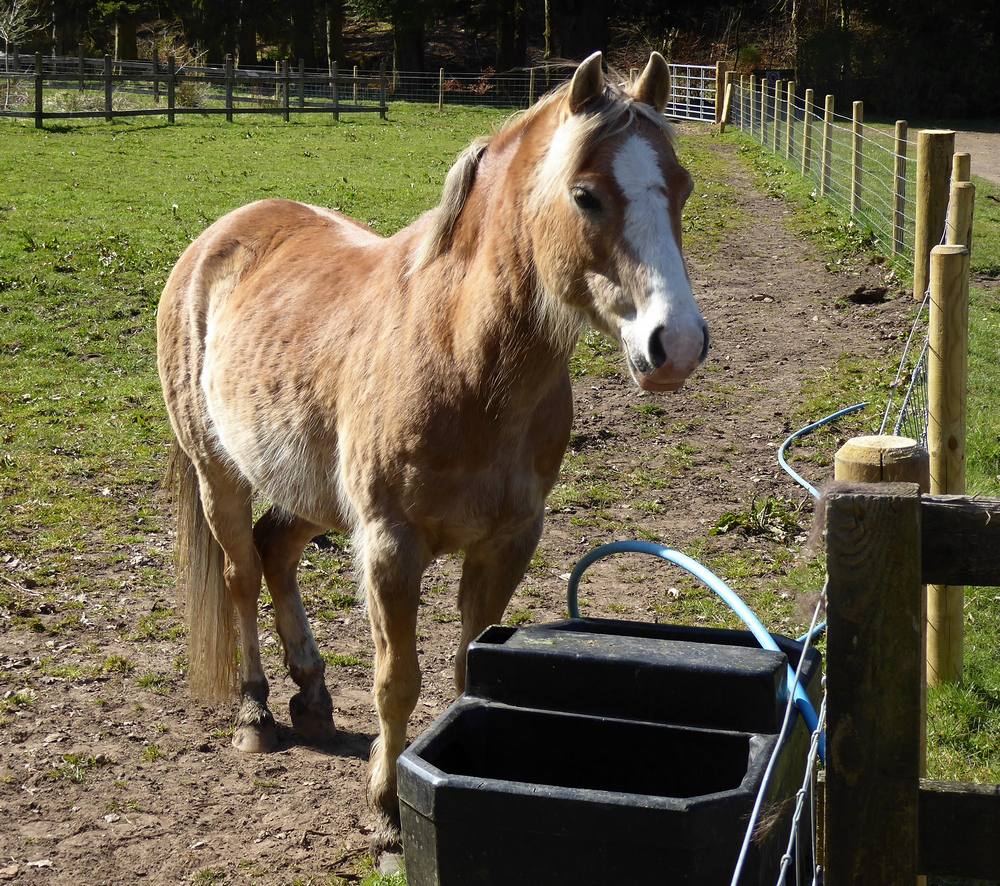 Some of the horses from Turlood stables are grazed in the fields in front of Stockbriggs Steading. 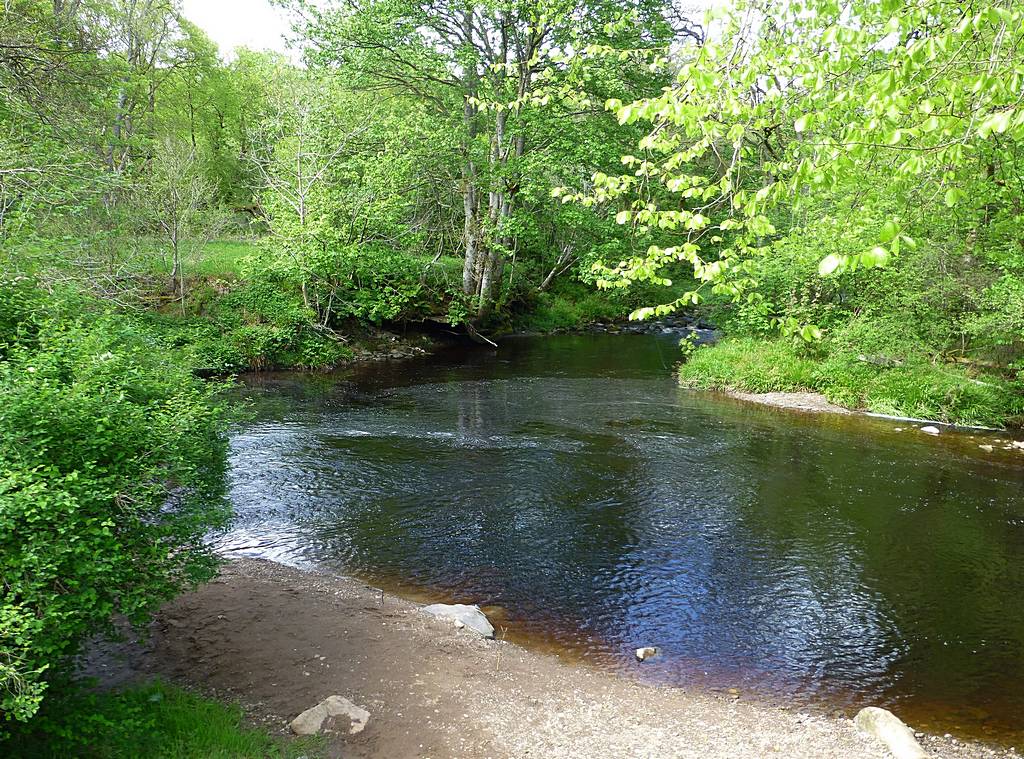 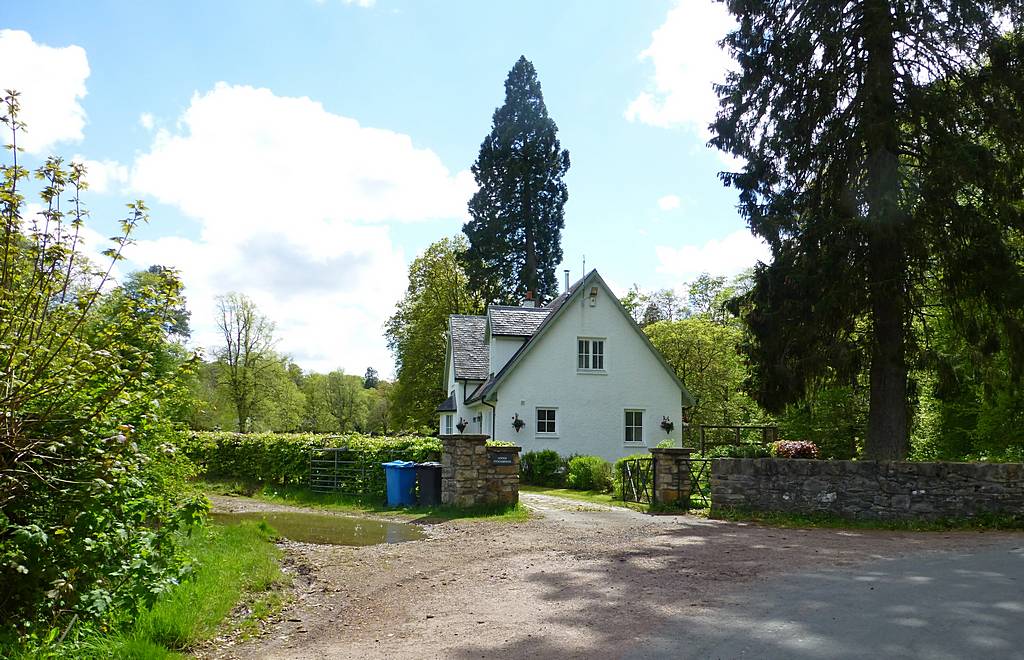 The original Lodge shown below had to be demolished in 1997. This splendid replacement was built in 2000.

Stockbriggs Gatehouse in the 1930s

There are other properties on the Stockbriggs estate - Turlood House (formerly Turlood Cottage) and a number of bungalows near the Cumberhead Road entrance. Opposite this entrance is Porterhall Cottage.

Page produced: 27 April 2021 DJH. Updated 14th May 2021 with more historical information. Further updated on 2nd June and 30th June 2021 with more historic photos. Photos of re-used stonework at Auchlochan added on 21st June 2021. A photograph of the original Stockbriggs Lodge was added on the 9th March 2022. Information on the present Stockbriggs Cottages and Stockbriggs Steading was updated on 11th June 2022, thanks to Dave Browning.

Many thanks to Peter McLeish for providing historical information and photos. Use has been made of information collected by the late Robert McLeish.